DIFFERENCE BETWEEN AFFECT AND EFFECT 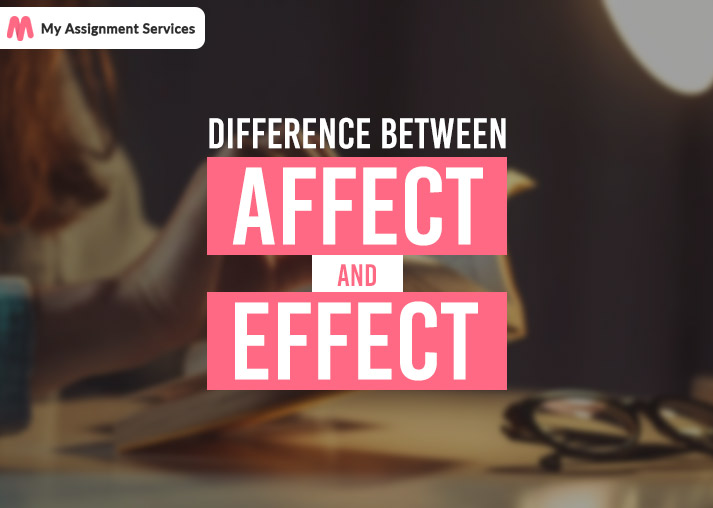 Effect vs Affect: A Guide To Their Correct Usage

Confusion generally emanates from a lack of knowledge & understanding. In any natural language, confusions surrounding phonetically and orthographically/ morphologically similar words with different meanings are commonplace. The prevalence of such confusion is higher among young learners, particularly at the elementary level.

In the English language, one specific pair of words that stupefy many students is effect & affect. Unfortunately, the differences between effect and affect are quite slim from both structural and phonetic aspects, and therein lies the source of all the confusion. In many cases, confusions surrounding the meaning & application of both words lead to silly mistakes.

This write-up intends to help readers resolve their uncertainties surrounding affect and effect, once and for all.

Effect vs Affect: Why and How Are They Different?

So, what is the main difference between affect and effect?

Understanding this fundamental difference can help readers determine when to use affect and effect better.

Effect signifies the result of something.

Effect is pronounced [ih-fekt]; it almost sounds as if it has an I-sound at the beginning.

The difference between effect and affect can be understood better with some examples.

As stated, affect functions as a verb and means “to influence." Here are some examples.

Effect generally functions as a noun, though there are certain exceptional cases. In its conventional noun form, effect means results or consequences.

Affect As a Noun! (an exceptional case)

Affect can act like a noun in some instances. For example, affect is used as a noun in psychology, which means "the mood that someone appears to have.”

Effect As A Verb! (the exceptional case)

In occasional cases, effect serves as a verb, whence it means “to bring about” or “to accomplish” something.

For years, animals raised as livestock have been fed various chemicals and concoctions to effect faster growth.

There are particular techniques to determine whether effect and affect are functioning as a verb or noun.

There's an easy way to understand whether effect functions as a verb or noun in a sentence.

Look for whether there is an infinitive or the “to be” form of effect. When effect is used as a verb, it commonly appears in its infinitive or “to..” form. If not, then it’s functioning as a noun.

To determine whether to use affect or effect, contemplate inserting an article in front of the word concerned. Then, if the sentence still makes sense, its grammatical construction requires a noun, and effect might be the right choice.

Grammar exercises are a great way to imbibe and apply all of the above points better.

Here are some exercises for readers to solve. (Try to get them done without peeking at the solutions!)

Here are some exercises for readers to solve. (Try to get them done without peeking at the solutions!)

Well, that’s all the space we have for today. Hope this write-up helped ease the effect vs. Affect confusion in all readers alike.

Get rid of all your grammar troubles and deliver impeccable assignments with MyAsssignmentservices.net, a leading assignment help service online.

Score Better Grades With the Assignment Writing Assistance of MyAssignmentservices.net

With 2000+ subject matter experts and more than 100k+ satisfied clientele, MyAssignmentservices.net is THE best place to get your assignments done to perfection.

Writers of exceptional merit work in cohesion to deliver perfect solutions for every order. Science, Math, Language, Literature, Computer Science, Nursing, Management, Engineering, Finance, Economics- we offer writing and tutoring assistance on more than 100 subjects. Our solutions are pitch-perfect, and our deliveries are on the dot.

A bundle of perks makes things all that better.

So, calm your mind and take a step towards success with MyAssignmentservices.net. Let us know what you need, and we will make sure you get it in the best way possible!

DIFFERENCE BETWEEN AFFECT AND EFFECT